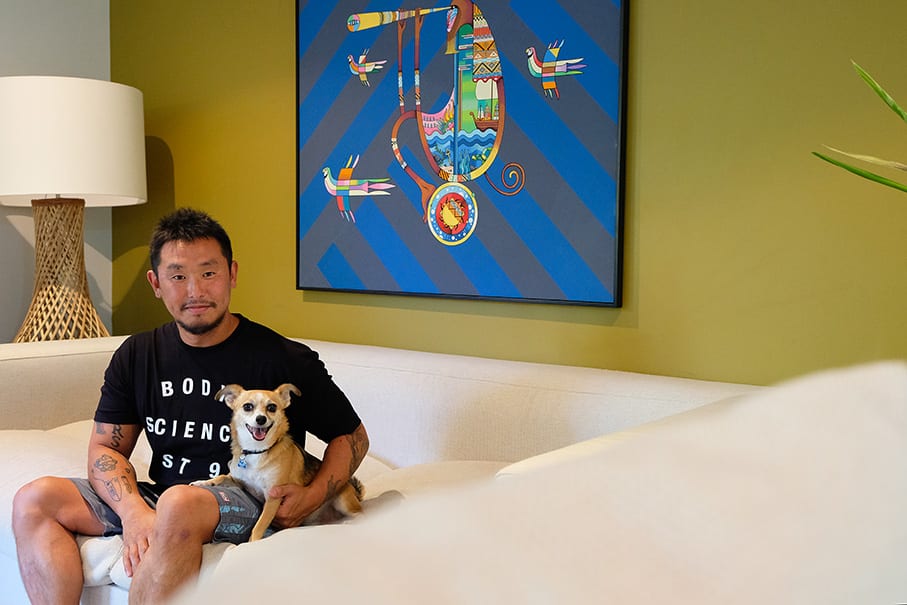 Created around the same premise as our BLA! (Brewing Local Artists) event, the Artist in Residence program is here to help generate exposure for Gold Coast artists, and to engage and inspire our community with the depth of creative talent that exists here on the Coast.

Go Suga is one funny, creative and insanely talented individual. Go is a Japanese born Gold Coast artist who moved to Australia with his family from Japan in 1990, Go has truly embraced his new home, creating incredible work that references everything from mythical gods through to the waves he rides.
Below is part one of our interview with the man himself. Part two will be live on February 1st.

Go Suga’s Night No Hajimari.
“Back in time now before Hades comes back to surface. The ancient giants have woken up… Spreading the night sky, collecting the plants. End is near by?”
6mm x 600mm x 900mm + frame

Your style draws from the Japanese aesthetic Wabi-sabi*. Have you always had this view when approaching your art or is it something that has developed in your work over time?
I actually never had this view in my art in the beginning. My work used to be full of perfectly straight lines, circles and shapes using ruler and drawing compasses. It was important in my older works as these lines and shapes represented the artificial, technological world.
I usually do a few sketches before painting and from those sketches pick the one I like to paint. These sketches are totally freehand with no colours or decoration, so in a sense these are more direct visual from my mind onto paper. These sketches have wiggly lines and I started seeing character in each of them. No lines are the same, unlike the lines I made with ruler and that is part of Wabi-sabi – to appreciate the imperfection. For me there are still lots of artificial elements to my paintings so I would say I’m on my way. Yeew!

Is there a specific part of the Wabi-sabi style that attracts or appeals to you?
I love old rusty stuff. Cars, bikes, furniture all sort of things I like them for what they are, they have more character and history to them and again this is part of Wabi-sabi, is to appreciate imperfection. I have an old Toyota Hiace van which I love, and some people ask me “when are you going to finish the paint job and do it up” my usual answer to them is “It’s already done up”. I love it for what it is, no need to force it. I love the imperfection in life, and around mid-way through 2016 I started to want to shift my work slowly to have those imperfect lines and elements in my art… I’m still working on it.
I reckon you shouldn’t just appreciate the new, young or easy but learn to love and embrace the old, aged and difficult because these things are just stages and part of life no matter what. Young will become old, sometimes it’s difficult but easy will come in time. If there’s no difficulty easy will not exist. Wabi-sabi actually does a lot of good in relationships too … Take marriage for example, there is no way to find out all of the characteristics of a person before marrying – human is a living creature that could change character in future, who knows? But if you learn to accept everything that comes, in time you are bulletproof! Wabi-sabi teaches me to be a bigger, wiser person.

Much of your work tells a stories where mythical gods or goddesses play a part. When you create such work, does the story come first or the visuals?
Sometimes story comes first but other times visual comes first, I try to make ideas come as naturally as possible so it is not so much fixed. It might be a seasonal thing as sometimes I‘m in story telling mode and other times I’m not, there are no set process to how my paintings come about I guess.

As part of this story telling, not only does one piece have its own story, you’ve also created a series of work where each piece illustrates different stages of one, larger story. Was it a process discovery for you working through each piece?
The series you refer to was one I created for my most recent exhibition at 19 Karen. That show was all about showcasing the story I had at the time about a Time traveller and what he/she saw in the past world that was about to be taken over by an underworld god and goddesses.
The large picture of this story was in my head but was all blurry. For some of the paintings I had a clear picture as to which stage this painting will sit in the whole story but for other paintings I just went off and did few sketches and the story just kept on coming out. Then a funny thing happened, as Steve Jobs once said: “connecting the dots”. Even the ones which I didn’t have clear vision on, half way through the painting these design elements on the painting started to connect with my whole story! There are some moments where you feel like you’re not the one creating these paintings and this certainly was one of those occasions.
It feels like there are endless ideas stacked up in the universe somewhere and you are just the filter or a connector of some sort which can grab these ideas and put it into reality. Also, it seems like the more open and more liquefied (or free) your mind is, the more often you can access these ideas (click here to check out some of the stories in Go’s work).

Time Traveller – Go Suga.
Lord Hades and his soldiers has risen from the underground world. They have used their weapons to cover the planet earth with eternal darkness. Now Time Traveller is sent back in time to examine what caused such destruction and if possible prevent it from happening to save the world!

Tell us about Go Suga – your Japanese heritage, living on the Gold Coast and how life has brought you to be a graphic designer, artist and surfer.
Go Suga is a funny named Sasian (sexi asian) man living in the best part of the sun shine state of QLD … the GOLD COAST!  Hahaha! A dude that loves to crack jokes but could get really serious at times of deciding what to eat for dinner;) Seriously I love this country, I didn’t like it when I first moved over here in 1990 as it was not my decision but my dads so it felt like I’ve been forced to come here – you know kids thinking. But now I truly thank him for bringing me to this awesome country full of nature, open minded funny buggers and most of all surf culture!! I started my diploma of Graphic Design at TAFE in 2006. I wasn’t doing much but wanted to start something then my dad suggested maybe do some course to learn new things. So I went to TAFE to see if there was anything interesting and I spotted Graphic Design, me and my brothers used to draw all the time when we were kids so was a easy choice for me. However as much as I love Graphic Design over any other regular jobs out there you are going to have client or a boss telling you to change the design you came up with or just create what you have been told, which is fair enough – they pay the bills. So work is work and I’m cool with that but I wanted my own creative space as well, a place where I could create anything I want the way I want. This is the reason why I started art.

Note: Am not talking about you Gregory Young san one of the “9 GC people driving creativity and innovation” he is my boss at work but friend also. We go surf together in the mornings 🙂

Now to surfing! Surfing is a great thing I don’t even know if I could say it’s a sport Its bigger than that for me and is deeply connected to my art. Like when I paint, when you ride a wave it’s like you and the universe become one. It is so good for the mind. It’s for fun of course but not just fun… hard to explain… it is more meaningful. It relates to what I was saying above about getting access to an endless stock of ideas in the universe but to be able to get there more often you have to be free or open minded, well surfing definitely helps in that department! I just need to improve my backhand a lot more so I can call my self a GOOD SURFER. I’m never a finished product, always a work in progress 🙂

Part two of this interview will be live here on our website on February 1st.

*Wabi-sabi represents a comprehensive Japanese world view or aesthetic centered on the acceptance of transience and imperfection. The aesthetic is sometimes described as one of beauty that is “imperfect, impermanent, and incomplete”. It is a teaching of the three marks of existence (三法印 sanbōin), specifically impermanence (無常 mujō), the other two being suffering (苦 ku) and emptiness or absence of self-nature (空 kū).
Characteristics of the wabi-sabi aesthetic include asymmetry, asperity (roughness or irregularity), simplicity, economy, austerity, modesty, intimacy, and appreciation of the ingenuous integrity of natural objects and processes.

Go Suga would like to thank 19 Karen Director Terri Lew along with the rest of the staff for being such a big part of his artistic career so far.

Each month we’ll feature a new one of our incredible Gold Coast artists, with their work showing at our Taphouse in Burleigh and here online. You’ll be able to interact with them via social media, purchase their work or just stare in admiration at what they’ve created. If you are interested in purchasing some artwork, you can get in touch with Go Suga via his website, or if you’re an artist and would like to be a part of BLA! or our Artist in Residence program, send us an email. 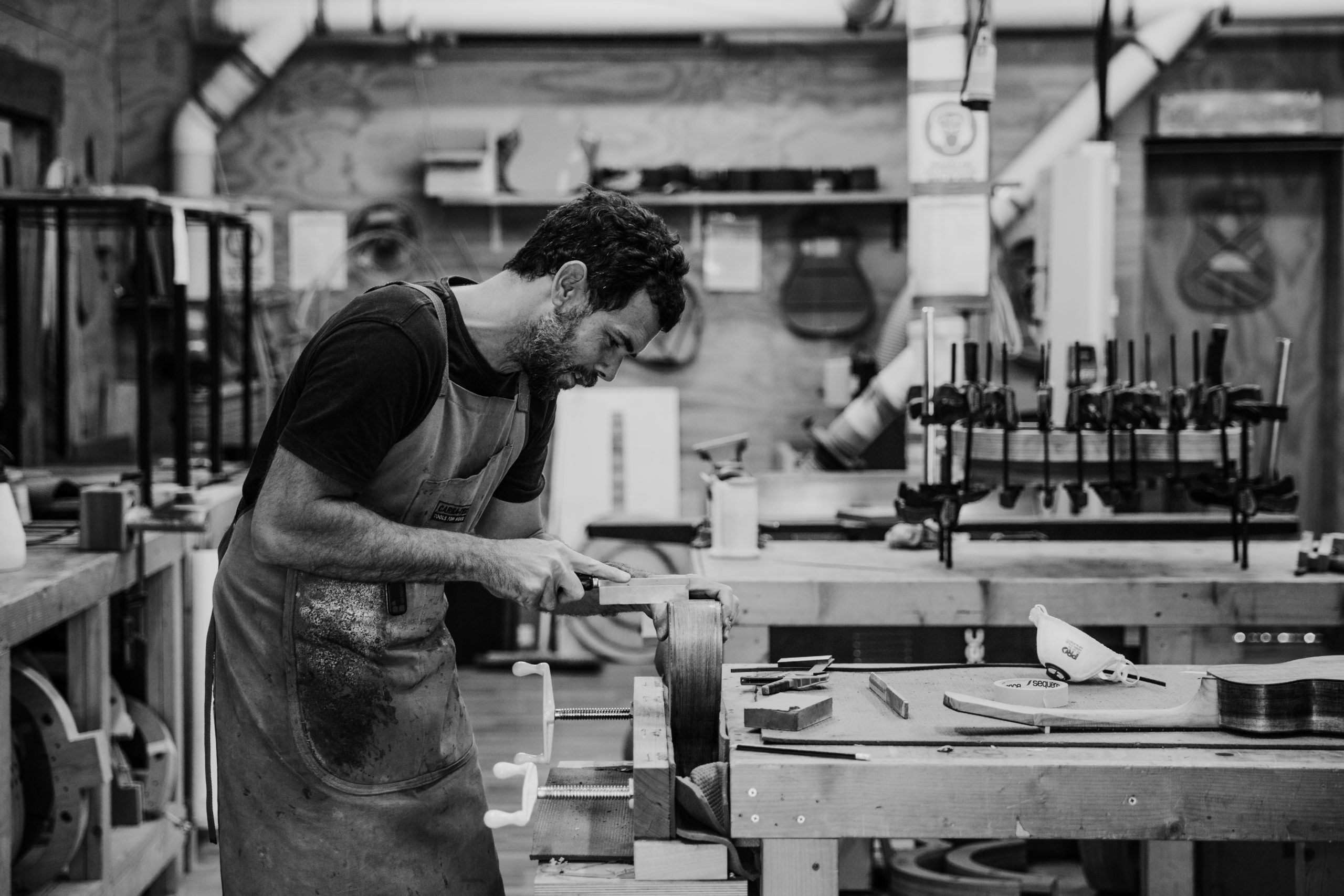 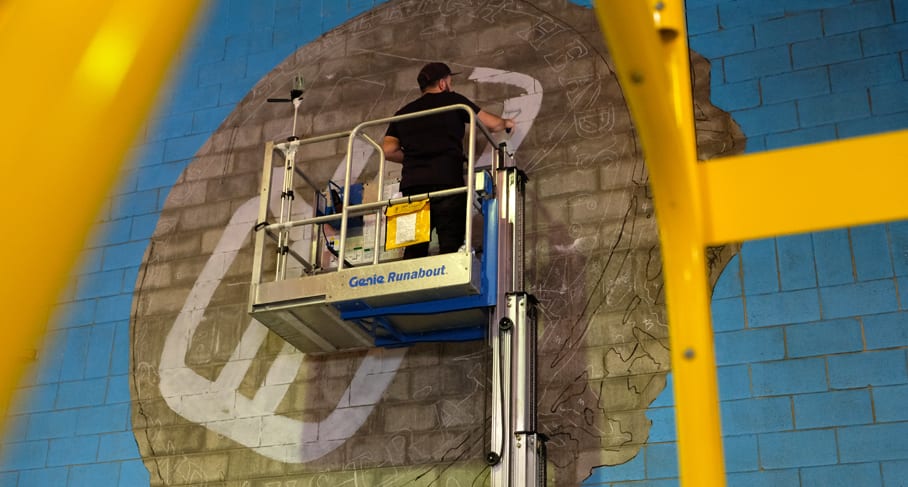 Making a Mural with Kiel Tillman 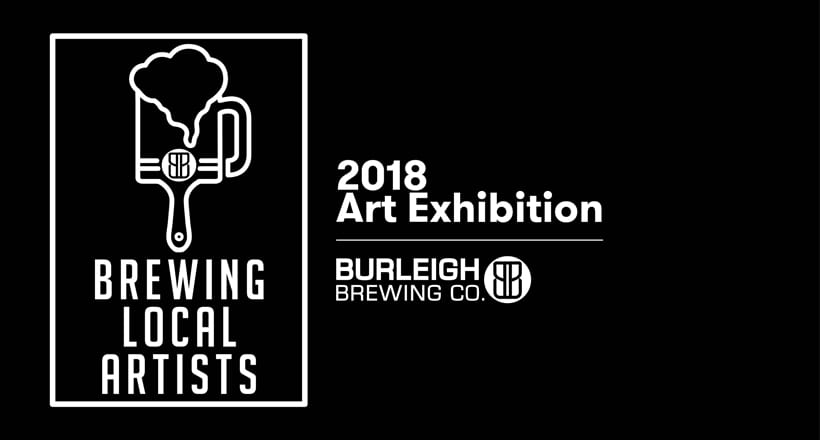 BLA IS BACK WITH A 5K REWARD!